Celergen’s philosophy encapsulates the transformative power of Cell Therapy which aims to awaken dormant cells within the human body, thereby stimulating the growth, activity of existing tissues and the repairing and regeneration of old and malfunctioning cells.

Celergen’s philosophy encapsulates the transformative power of Cell Therapy which aims to awaken dormant cells within the human body, thereby stimulating the growth, activity of existing tissues and the repairing and regeneration of old and malfunctioning cells.

Celergen’s unique formulation of bioactive ingredients ensures that the nutrients can be absorbed. The independent clinical studies of Celergen key ingredients, which are conducted using randomized double-blind placebo test with more than 2960 participants of clinical subject, demonstrates proven and outstanding result.

BioDNA Cellular Marine Complex (highly polymerized) is a marine substance that is well absorbed and perfectly tolerated in strong doses.It is a strong antioxidant, hydro soluble membrane protector and a radiation protective substance. It is effective in the treatment of asthenia (loss of strength and energy), arthrosis (inflammatory joint pain) and periodontal pathology. Further it permits the amelioration of physical and intellectual performance, cicatrisation (healing of) and the performance of the immune system.

Reduce Undesirable Symptoms Of Radiation And Chemotherapy For Cancer Patients

Its anti-oxidant activities have been effective against the harmful effects of ionizing radiation. It can be, in cancerology, a post cure administered to reduce the undesirable effects of radiation therapy.

It possesses cicatrisation (healing of), notably in the case of immune depression or in the course of infectious pathologies. Its administration permits general restoration and the treatment of the physical effects of asthenia (loss of strength and energy).

In athletes its interest resides particularly in its help in physical performance. Especially in elevating the VO2 maximum and reducing the recuperation time.

Finally, its efficacy on essential arthralgies (joint pain) and its chondro stimulant properties are possibly associated with its cartilage extract which is rich in glucosamine and/or chondroitin, and effective as a therapy for arthrose (inflammatory joint pain). In a double blind, multicentric clinical study, 116 patients suffering from chronic spinal problems (for a period of more than 1 month), the effect of only BioDNA Cellular Marine Complex (1g/day for 40 days) was evaluated against a placebo.

The intensity of the pain, quantified on the numeric scale of Huskinson diminished by 43.6% with BioDNA Cellular Marine Complex (versus 25.4% with placebo). In an open study, 2960 persons affected by arthrosis (inflammatory joint pain) with an average age of 61 years old, received for 1 or 2 months an association of BioDNA Cellular Marine Complex (200mg/day) and a complex of vitamins B and E.

Benefits from this treatment were seen at the end of the 1st month of treatment. Much of the pain associated with arthrosis (inflammatory joint pain) was relieved in 89.5% of the cases (21% relieved completely, and 68.5% were partially relieved).

Physical performance was improved in 83.6% of the cases. The same association (BioDNA Cellular Marine Complex and vitamins B and E) was tested against Diclofenac (an anti-inflammatory, non-steroid) on a group of 67 persons affected by arthrosis (inflammatory joint pain) with average disability of the knees and hips. The scores observed in the treated asthenic patients directly approached those patients seen as normal.

Almost all the asthenia symptoms (58 to 60) were improved and many of the most debilitating symptoms were particularly diminished. The action on asthenia by BioDNA Cellular Marine Complex globally is positive in 52.4% of the cases. In a multi-centered study, a group of 688 adults (445 woman and 243 men) showed spontaneous asthenia (loss of strength and energy) during the interrogation. Those who were isolated or associated with a non-evolutionary benign organic pathology, the treatment by BioDNA Cellular Marine Complex (800mg/day for 15 days) permitted a reduction of the Behavior Rating Scale (61 criteria) of 64.5% for physical asthenia and 57.0% for mental asthenia. The amelioration was more intensely marked, than were the more severe symptoms. The global efficacy of the treatment was well evaluated by researchers in 79.1% of the cases. In another open study, where it was noted that patient did not receive another anti-asthenia treatment (70% of the cases), of 6876 patient treated for 15 days by an association of BioDNA Cellular Marine Complex (400mg/day) and ascorbic acid (1g/day), fatigue at night was improved ( a reduction of more than 50% of the intense symptoms) in 82.5 % of the cases, fatigue in the morning by 82.9% of the cases, difficulty concentrating in 76.9% of the cases, trouble sleeping in 75% of the cases, and trouble with appetite in 80% of the cases. Finally in an open clinical trial of 24 persons of more than 50 years of age with asthenia (loss of strength and energy) of which 16 had anorexia and 8 were chronic alcoholics, the taking of BioDNA Cellular Marine Complex (800 mg/day for 1 month) had improved the patients general state in 70% of the cases and their mental state in 63% of the cases. 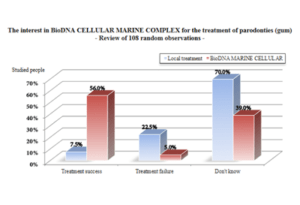 On a group of 108 patients affected by periodontal pathology, the administration of BioDNA Cellular Marine Complex (1600 mg/day for 3 months) reduced the index of dental mobility to a high of 45.7% and a low of 22.5%. fifty six percent (56%) of patients treated with BioDNA Cellular Marine Complex have found that the treatment was a success against only 7.5% who were only treated with a traditional local method. In regard to psychomotor and biometrics of subjects with mental defects. In the course of a double blind study of 256 children between the ages of 6 and 21 with an average to profound mental defects; and who exhibited exogenous defects with an intellectual quotient (IQ) superior to 40 and a real age understanding of between 8 and 14 years, the children had benefited by gaining mental age after taking BioDNA Cellular Marine Complex (200 to 600 mg/day) for 3 months. 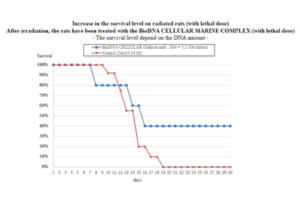 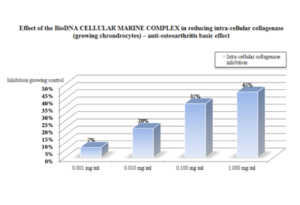 In effect, in mice after the realization of experimental wounds, the administration of BioDNA Cellular Marine Complex accelerated the cicatrisation (healing of) by augmenting the proliferative activity and the number of polypoid epidermal cells. In rats one hour after the administration of 325 mg/kg of aspirin, the taking of BioDNA Cellular Marine Complex (10 to 50 mg.kg per os) prevented the apparition of gastric ulcers from aspirin.

Peptide E Collagen comprises the highest premium grade quality collagen and elastin peptides from France and has been proven to reinforce skin hydration and elasticity.

Peptide E Collagen polypeptides have a low molecular mass that makes it soluble in aqueous phase and fully digestible. 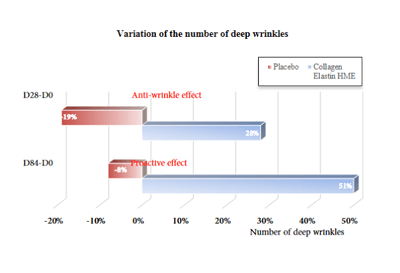 Made up of the 2 main components of outer skin layers, collagen and elastin, Peptide E Collagen is easily absorbed, lifting and toning slack areas, improving hydration and skin thickness while also reducing lines, wrinkles and roughness.

This figure shows the effect of 2 grams/day of Peptide E Collagen given orally for 28 days on forearm wrinkles and crow’s feet in 43 healthy female volunteers, aged 40-55 years.

In other words, Peptide E Collagen rebuilds outer skin layers from the inside out and make your skin toned, supple and well hydrated while also reducing lines, wrinkles and roughness. 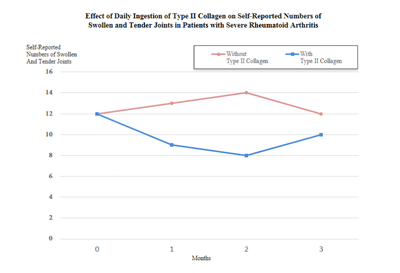 In a clinical trial conducted in 1993, hydrolyzed collagen was shown to reduce the number of swollen and tender joints in patients with severe rheumatoid arthritis. Hydrolyzed collagen is easily digested and absorbed by the body. This, along with its ability to accumulate in cartilage, makes Peptide E Collagen a powerful ingredient for alleviating the symptoms of rheumatoid arthritis.

Peptide N has the Glycemic Index reducing property, and, thus, is a natural mean to fight against the increasing number of overweight people and health disorders that are linked with obesity. 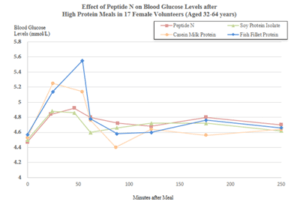 Peptide N, one of Celergen’s ingredients is a marine protein hydrolysate proven to reduce the dietary glycemic index or GI. Peptide N has been shown to prevent unhealthy body fat accumulation, which aids in maintaining a healthy body weight and reducing the risk of obesity, whilst alleviating symptoms of type II diabetes.

Glucose that enters the blood from food is used for energy production in the body’s cells, while excess glucose is transformed into fat and stored for later use. Over time this constant storage of fat leads to obesity. Second, frequent sharp, prolonged peaks of blood glucose and insulin (from high GI foods) are known to increase risk for insulin resistance and type II diabetes. On the other hand, a gradual release of blood glucose (from low GI foods) does not affect this risk and also delays hunger pangs.

This figure shows the results of a study evaluating the effects of 4 different proteins – Peptide N, fish fillet, casein milk protein and soy protein isolate – on blood glucose levels in 17 female volunteers (aged 32-64 years). Each volunteer consumed these proteins in random order, always as part of composite meals of similar macronutrient composition with a 1-week gap between each meal.

Blood samples were taken from each volunteer to assess levels of glucose, insulin and other biomarkers in the fasting state and 7 times after each meal, for up to 240 minutes.

This study found that Peptide N supplementation resulted in a significantly blunted blood glucose response than with fish fillet protein or soy protein isolate, lowering the risk of obesity and alleviating symptoms of type II diabetes. In other clinical studies, Peptide N has also been shown to reduce the appetite and promote satiety via its actions on metabolic hormones.

Clinical Study 2: Effective For Treatment Of Photoaging by Peptide M

Exposure to sun and other sources of UV-radiation are the key factors in causing premature skin aging that lead to problems such as wrinkles, roughness, laxity, mottled pigmentation, etc.

Numerous clinical studies have shown how oral marine polysaccharides supplements could be helpful in the dermal thickness, skin wrinkling, skin colour and viscoelasticity with considerable improvement.

Celergen is a potent nutritional treatment that stimulates the human body’s natural healing powers. Celergen triggers the repair and rejuvenation of individual cells.

We use cookies to ensure that we give you the best experience on our website. If you continue to use this site we will assume that you are happy with it.Accept
